» Newsroom » ANU and The Netherlands demonstrate the power of solar energy

ANU and The Netherlands demonstrate the power of solar energy 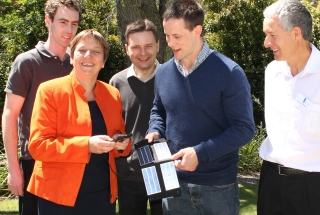 f we’ve been reminded of one thing this month, it is that solar energy is on the up and is a very powerful resource!

Advancements in solar energy and automotive technology were demonstrated on Friday 18 October by the ANU College of Engineering & Computer Science's Centre for Centre Sustainable Energy Systems (CSES) at the Embassy of the Kingdom of the Netherlands, and at the World Solar Challenge earlier this month.

Solar cars tested the ultimate boundaries in the friendly challenge where some of the world’s brightest young minds from leading universities drove their innovations some 3000 kilometres last week.

After a double-dutch victory in the competition, the Embassy was delighted to display the victorious Dutch solar cars and host a lecture about the future and power of solar energy with the Research School of Electrical, Energy and Materials Engineering.

Professor Andrew Blakers from the University’s Centre of Sustainable Energy Systems spoke about the current Australian solar energy industry and in particular the future of photovoltaic solar cells.

“Given the current trends and rates of development, Australia’s electricity consumption is on track to be powered 100 percent by wind and solar energy come 2040,” he says.

Professor Blakers was pleased to point out that very few fossil fuel power stations had been developed in the last three to four years, and that new stations were in the form of wind and solar energy generators.

“This is very apparent in Australia and Europe, and North America and China are following suit.

“Many people may not be aware of the leaps South Australia has taken towards renewable energy. In the last five years they have moved from almost no use of renewable energy to 31 percent, that is powered by wind and photovoltaic solar cells, he says.”

While concerns were raised by the audience about the potential for solar energy is northern Europe, Andrew indicated a range of renewable energy applications, and ways that neighbouring countries could collaborate when it comes to the supply of solar energy is particular.

“Winds off the North Sea can be very strong and are a vital source of energy in that region that can’t be ignored.

“It is standard practice to transmit gigawatts of hydro, wind and solar energy over thousands of kilometres away utilising low loss high voltage DC transmission,” he says.

Professor Blakers indicates that in diverse climates it is all about the combination of renewable energy, “It is a great trio - solar thermal, photovoltaics and wind. Together they can achieve a lot!”

While 1.1 million domestic homes have solar panels on their roof, the focus is now on businesses and large retailers should be next to move forward.

This is certainly the case with the Dutch Embassy who not only welcomed guests to view solar cars and attend the lecture, but also previewed their new Embassy building - a modern architectural feat that proudly showcases a large array of solar panels.

Researchers from ANU also participated in the solar displays throughout the day. Martin Berry, Chris Jones and Jonathan Wilson from the ANU College of Engineering & Computer Sciences' CSES, are developing mobile photovoltaic micro modules, and demonstrated a solar phone charger utilising the University’s SLIVER Cells, that Ambassador Ruigrok was impressed with and demonstrated to her audience.