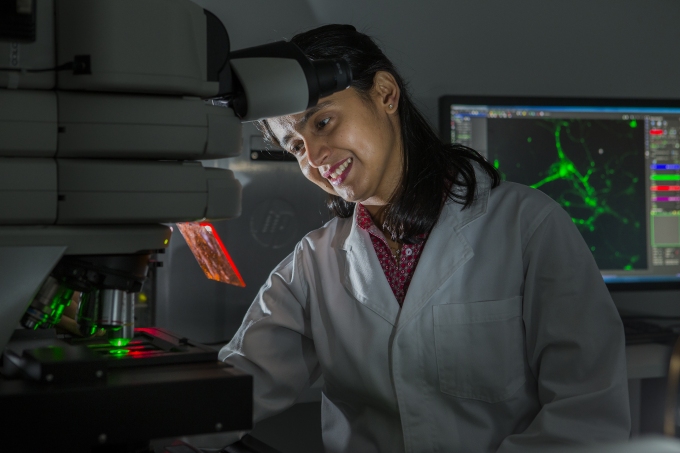 Researchers at The Australian National University (ANU) have developed a suitable material to allow brain cells to grow and form predictable circuits, which could lead to the development of prosthetics for the brain.

Researchers grew the brain cells on a semiconductor wafer patterned with nanowires which act as a scaffold to guide the growth of brain cells.

Lead researcher Dr Vini Gautam from the Research School of Electrical, Energy and Materials Engineering at ANU said the scaffold provides a platform to study the growth of the brain cells and how they connect with each other.

“The project will provide new insights into the development of neuro-prosthetics which can help the brain recover after damage due to an accident, stroke or degenerative neurological diseases,” Dr Gautam said.

The study is the first to show the neuronal circuits grown on the nanowire scaffolds were functional and highly interconnected, opening the potential to apply their scaffold design for neuro-prosthetics.

Project group leader Dr Vincent Daria from The John Curtin School of Medical Research hopes to use the brain on a chip to understand how neurons in the brain form computing circuits and eventually process information.

“Unlike other prosthetics like an artificial limb, neurons need to connect synaptically, which form the basis of information processing in the brain during sensory input, cognition, learning and memory,” Dr Daria said.

“Using a particular nanowire geometry, we have shown that the neurons are highly interconnected and predictably form functional circuits.”

Dr Daria said it was important to build up the appropriate environment where neurons can be predictably connected into functional circuits.

“We were able to make predictive connections between the neurons and demonstrated them to be functional with neurons firing synchronously,” he said.

“This work could open up new research model that builds up a stronger connection between materials nanotechnology with neuroscience.”

The research was a multi-disciplinary collaboration between physics, engineering and neuroscience.

The nanowires were fabricated by a group led by Professor Chennupati Jagadish at the Research School of Physics and Engineering at ANU.

The research has been published in Nano Letters.