» Newsroom » ANU robots vs. the maze

ANU robots vs. the maze 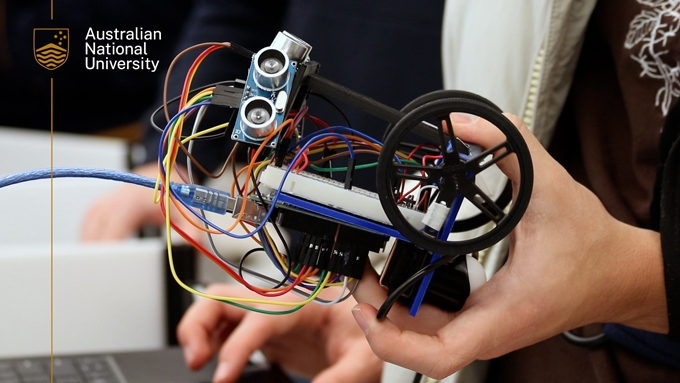 Only 3 of 60 robots completed both mazes in "Discovering Engineering", an introductory course at ANU College of Engineering and Computer Science.

Student teams watched with hands clasped in prayer as their robot cars attempted to navigate mazes using sonar sensors to detect and avoid obstructions. To earn high marks, the robots would need to complete each of two mazes in under 3 minutes, with points deducted for touching walls.

"I was expecting to have to start with a bunch of maths and planning before actually getting to start working on any kind of project," said Matthew Britton, a first-year student taking part in a course called Discovering Engineering at The Australian National University (ANU). "So being handed a very open-ended project right at the start was a lot of fun."

The student teams were supplied with a "bag of bits", including ultrasonic sensors, wheels, and motors. An electronic prototyping platform called Arduino allowed them to upload coding from a laptop to a small piece of hardware that served as the robot's "brain". "The Arduino would read the received signals from the sonar sensor," explained student Yingjie Wang. "If the received signals implied that the distance between the obstacle in front of the sensor and the rover is shorter than a certain distance, the Arduino would communicate to the motors to either make the rover stop or to turn a corner."
Course convener Dr Fiona Beck said the Rover Project teaches teamwork and collaboration by throwing first year students in a "potentially stressful but actually quite unimportant situation" that requires computer programming as well as mechanical and electronical engineering.
"It's not just words on a page or me talking to you in the lecture," Dr Beck said. "It's actually information that you need to go away and implement right now. And it's a really great way to learn about engineering by doing engineering."

The core of our algorithm

Britton said the biggest challenge for him was learning C++, the programming language used to shape the robot's brain. A servo motor turned the ultrasonic sensors (robot's eyes) left and right to measure the distance of obstacles to the right, 45 degrees to the right, straight ahead, 45 degrees to the left, and to the left.
"From there we applied some logic to these measurements," Britton said. "If the rover was too far from the left hand wall, you turn the rover left by adjusting which motor is powered, what direction it rotates and how long it is allowed to rotate."
If the rover detected that there was a wall on its left, it would go straight. If it detected nothing on its left, it would turn to the left. And if it detected a wall on its left and a wall in front of it, the rover would turn right, Britton explained.
"The core of our algorithm is that the rover does its best to stay within 7 centimetres of the left hand wall, because as long as the rover can do this, it can complete any maze," he said.
Wang praised her teammates as wonderful individuals who were "collaborative and goal focused". She also praised the tutors and course conveners, Beck and educational systems officer Jenny Simmons.
"They did an excellent job scheduling it so that we were not thrown into the deep end all at once. Rather, the skills that we need are taught to us gradually in response to the milestones," Wang said. "In addition, new technical skills are put into practise every week in tutorials where we are also able to seek help from peers and tutors."