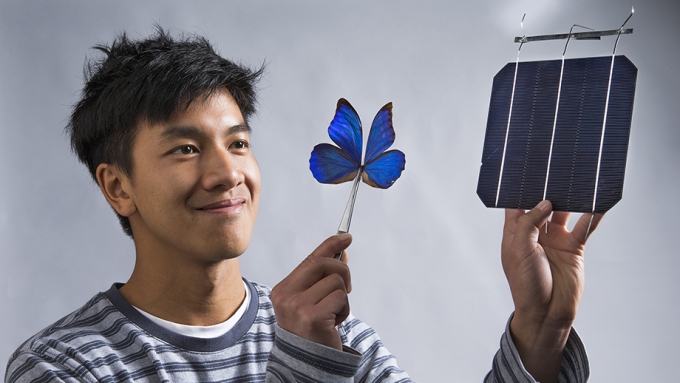 Engineers have invented tiny structures inspired by butterfly wings that open the door to new solar cell technologies and other applications requiring precise manipulation of light.

The inspiration comes from the blue Morpho Didius butterfly, which has wings with tiny cone-shaped nanostructures that scatter light to create a striking blue iridescence, and could lead to other innovations such as stealth and architectural applications.

Lead researcher Dr Niraj Lal from The Australian National University (ANU) said the team made similar structures at the nanoscale and applied the same principles in the butterfly wing phenomenon to finely control the direction of light in experiments.

He said scientists can greatly improve the efficiency of solar cells with effective light management.

“Techniques to finely control the scattering, reflection and absorption of different colours of light are being used in the next generation of very high-efficiency solar panels,” he said.

“Being able to make light go exactly where you want it to go has proven to be tricky up until now.”

Dr Lal said the aim was to absorb all of the blue, green and ultraviolet colours of sunlight in the perovskite layer of a solar cell, and all of the red, orange and yellow light in the silicon layer - known as a tandem solar cell with double-decker layers.

Researchers at the ANU surpassed silicon efficiency records with such a cell last month.

He said the technique could one day be used to make opaque objects transparent to certain colours, and vice versa, as part of new stealth applications.

“We were surprised by how well our tiny cone-shaped structures worked to direct different colours of light where we wanted them to go,” Dr Lal said.

He said the technique could also be used in architecture to control how much light and heat passed through windows.

“Using our approach, a window could be designed to be transparent to some colours non-see through and matt textured for others – so there are very cool potential applications in architecture,” Dr Lal said.

The technique was very scalable and did not require expensive technology, he said.

“These intricate nanostructures grow and assemble themselves – it’s not by precise control with a tiny laser or electrons,” Dr Lal said.