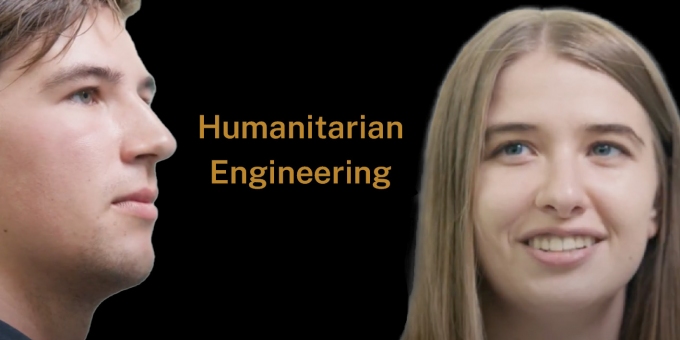 When Hayley Yates and Jack Hill receive their diplomas at the end of Semester 2, 2021, they will be among the first to do so with a minor in Humanitarian engineering. Both say their studies have been guided by life missions to “make the world a better place”.

Yates had been considering a double degree with Engineering and Arts, feeling dissatisfied with the strictly technical work of a more traditional engineering degree. She wanted to engage more with the humanities. “When I saw I would be able to do anthropology, environment, and language courses without adding any time onto my degree, I knew it would be the perfect option,” she said.

At this time, the minor was still in the development stage, however Yates and Hill were allowed to apply and be assessed under the 2020 guidelines, even though it was then 2019. “I honestly thought Jack and I were the only two doing it until recently!” Yates said.

Hill, like Yates, traveled to Southeast Asia as part of the Engineers without borders (EWB) design summit. EWB and ANU are partnering organisations in the creation and offering of the HumEng minor, and the summit is part of the curriculum. Humanitarian engineering explores how technology can contribute to a range of humanitarian and development contexts, from disaster response to long-term community development, both domestically and internationally.

“I'm quite interested in the human aspect of engineering and how we, in a developed nation, can help aid prosperity abroad,” Hill said. “When I saw the minor open up, without hesitation I wanted to jump in.”

The process of creating the minor began with a course called Engineering for a humanitarian context (ENGN3013). Convenor, Dr Jeremy Smith, has served as a bridge between EWB and ANU, having devoted his career to an approach to engineering that involves local communities in co-designing solutions to local problems.

In 2015, Smith and ANU colleagues collaborated with EWB to offer ENGN3013, which was the first dedicated later-year humanitarian engineering elective in Australia.

“It opened up new opportunities for students – both within the student experience and in what was being taught. It allowed ANU to open up how people view engineering,” Smith told EWB.

Yates said she decided to study engineering to challenge herself; not because she excelled in maths or physics.  Her best subjects had previously been English and Literature.  “I did some volunteering in high school and certainly held some lofty ideals about having a positive impact, but I didn't have a clear vision for how engineering might have helped me achieve that,” she said.

She said she developed a drive and a sense of responsibility to engage with humanitarian work while studying at ANU.

“It was the people I met on campus and the belief systems they held that changed my worldview and made me feel like I had an obligation to engage in design work that was human-centred,” said Yates. “Of course, more technical disciplines of engineering also have the aim of improving society, but there's more emphasis on deriving technical requirements from people rather than learning about their experiences.”

Meet more members of the first HumEng cohort here and also below.