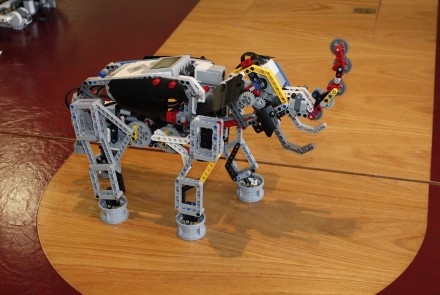 Siblings Abbie and Bri Wade, and Chris Claoue-Long are on a mission to bring the fun of building robots to ACT school kids.

The trio, all computer engineering students from the ANU College of Engineering and Computer Science, are about to knuckle down and help bring the world of robots, made from Lego, to young children in Canberra.

“It is amazing what you can create – you surprise yourself,” says Bri, an 18-year-old student who has helped build a robot that writes.

“Who would have thought a robot could write words like a normal printer? You think they’re so high tech. But you can actually build one yourself. It’s so surprising how much you can do with robots and it’s fun doing it.”

The students helped organise a series of workshops for children as young as eight, to help them learn how to build a toy robot.

Bri says there are great benefits for young people learning about robotics.

“The biggest one we’ve noticed is they’ve been able to learn from their mistakes. They become more resilient from doing it,” she says.

“You watch kids who have never built a robot get really frustrated with themselves. Our role is to teach them that everyone can make a mistake, but then learn from their mistakes – for us, this is really nice to watch.”

“We had one kid who was severely bullied at school to the point where he didn’t want to go to school,” she says.

“He came to our workshop and his mother was over the moon at how excited he was. He became really excited and said that he wanted to be a scientist working on robots when he grew up.”

The students say working with robots and children has been a rewarding experience.

“When I first came to ANU I chose computer science because it’s something I had never really experienced,” says 20-year-old Chris Claoue-Long.

“I chose it because I enjoy working with computers and I wanted to see where I could take it. It’s fun to try and share this passion with kids and show them what they can do.”

For more on the childrens’ workshops, that will run from 20-31 January, head to the kid technic website.