» Newsroom » Students explore the Internet of Things in Beijing

Students explore the Internet of Things in Beijing 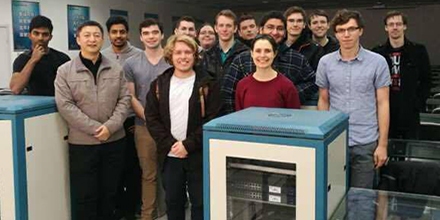 Studying and living on campus at the Beijing Institute of Technology (BIT), the students took part in a range of lectures and hands-on activities on the emerging field of Internet of Things (IoT).

“IoT is any small device embedded into an everyday object, which is connected to the internet. These devices can interact with one another, and with humans,” explains Noah, a Bachelor of Advanced Computing (Research and Development) student who took part in the study tour.

“For example, IoT makes it possible for your coffee machine to turn on as soon as your morning alarm goes off.”

The lectures covered topics relating to IoT, including cloud computing and security.

For maths and computer science student Alexandra, the study tour provided a unique opportunity to learn about IoT in a place where it’s becoming very common.

“In China, the Internet of Things is a lot more incorporated into everyday life - everything is so connected. BIT has specialist knowledge in IoT, so it was great to learn from the experts about a new and emerging area of computer science.”

The students also participated in a range of cultural activities: from language classes to dumpling making, as well as cultural visits to many tourist attractions around Beijing. However, the highlight was the chance to interact with other students from BIT.

“We had student buddies at BIT who showed us around – they took us to basketball games, they met us at the airport and took us out to restaurants. They showed us the ‘real’ side of Beijing, and we wouldn’t have been able to do as much as we did without them!”

The ANU students said they’d definitely recommend the program to others.

“It’s increased our global awareness and understanding of Australia-China relations; we now have a greater understanding of Chinese culture, as well as the social, political and economic situation of the country,” said Alexandra.

The BIT Internet of Things study tour was made possible for ANU students through an ANU Travel Grant, and a New Colombo Plan scholarship, a signature initiative of the Australian Government.

Applications for the 2017 BIT Internet of Things Study Tour will open in July 2017. Further information will soon be made available on the Current Student Opportunities page.