Undergrad prize winners score wins for the environment as well 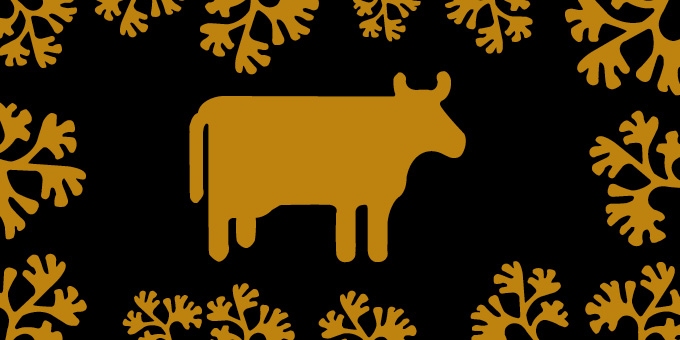 In 2020, Young Engineers Australia (YEA) invited students in Victoria to compete for prestige and prize money in the first YEA Case Competition. When Nicky Koubouzis learned that the 2021 competition would be expanded to include all states and territories, she started to dream. Thus began a journey that involves the enlistment of a billion cows and other livestock in the battle against climate change.

A third-year undergraduate with a major in renewable energy systems and management, Koubouzis said the competition was “a great opportunity to learn things we wouldn't typically learn in our courses.”

Five teams would be selected to give a live presentation before an esteemed panel of judges to determine a national champion. “To be honest we didn’t think we’d make it that far,” she said. In August, Koubouzis recruited three friends —Mitch Grady, Lakshya Dutta, and Matthew Robinson, also engineering majors with diverse and overlapping areas of focus —and registered for the competition. They had lectures to attend and course work to complete, but they entered the contest expecting they would inspire one another, and confident that they could handle the additional workload.

“We were seeking an opportunity to sharpen our analytical acumen… and take our ideas into the world”, Dutta said.  Over 300 student engineers saw that opportunity too, forming 81 teams representing 20 universities.

One day after the registration deadline, YEA announced that the competition jury would be seeking innovative ideas for the utilisation of captured carbon dioxide produced in the burning fossil fuels. By storing carbon emissions safely away from the atmosphere and then finding a productive use for it, this process can achieve the holy grail for climate change visionaries: carbon-negative industry.

“We had no idea what the problem-question was going to be, but we had a hunch it was renewables-based, as [YEA] outlined the winning team would present at the Climate smart conference,” Koubouzis said. In phase one, the foursome had two weeks to research and select a project, then write a proposal to be due on 10 September.

“We found an article on studies done on how Asparagopsis seaweed has been shown to reduce methane emissions from cattle, both here in Australia and over in the USA,” Grady said, citing field research carried out by CSIRO (Commonwealth Scientific and Industrial Research Organisation) in Australia, UC Davis, and the University of Pennsylvania.

The field research had been spurred by a groundbreaking study by CSIRO, James Cook University, and Meat & Livestock Australia, showing that compounds in seaweed disrupt the enzymes of gut microbes that produce methane gas during digestion. Livestock is the world’s third largest contributor to greenhouse gas emissions, and in the next 20 years, climate scientists expect methane’s negative impact on the environment to grow to 86 times that of carbon dioxide.

“The research team recreated these conditions in the lab, essentially carrying out this stage of the cow’s digestion in a flask,” Lux said.  “They added varying amounts of seaweed, based on a theory they had — that the chemicals present in the seaweed would make the cow’s gut bacteria take different routes to fermentation, and in turn produce almost no methane.”

The field research confirmed what lab research had suggested: a seaweed additive amounting to 2% of the total feed can reduce methane production by 99%.

Asparagopsis armata is a naturally abundant seaweed found in ocean waters near Australia and New Zealand. Grady explained that an Adelaide company called CH4 Global is actively working to commercialise Asparagopsis additives via farming at sea. If a global market emerges and the seaweed additive is fed to cows and other livestock globally, it could reduce greenhouse gasses enough to mitigate the disastrous impacts of climate change.

This was an encouraging discovery, but the YEA contest called for carbon capture and utilisation. Was there a way to work that in?

Having chosen the nickname “IT Crowd,” Koubouzis, Grady, Dutta, and Robinson submitted a proposal that introduced the possibility of using recaptured CO2 for land-based seaweed farming.

Recent studies estimate that seaweed collects CO2 up to 50 times faster than forests. If inland seaweed farms become a global industry, it would create turbo-charged carbon sinks, and produce a cattlefeed additive that would all but eliminate the world’s largest anthropogenic source of methane gas.

The team decided to do a feasibility study based on conditions in the state of Queensland, Australia’s largest contributor to methane emissions and home to 46.6% of its cattle. They also selected Queensland for its many coal-fired power plants, and its “influence over the Australian agricultural industry and its marine area”, Grady said.

On 23 September, YEA would announce the top 10 teams.

“I remember waiting all day for the email,” Koubouzis said. “At one point we thought they forgot to announce the results.”

But the email arrived in the late afternoon, announcing the top ten student projects, which included two from ANU — Awww yeah, and IT Crowd.

“When hearing the news we were over the moon, felt like our hard work was rewarded,” Koubouzis said.

More hard work was in store. IT Crowd was in the top 5. They now had one week to prepare a live pitch for a panel of industry judges, with the winner to be named YEA Case Competition 2021 National Champions. The other four teams were from Victoria, with two teams from the Royal Melbourne Institute of Technology, one from Monash University, and one from the University of Melbourne.

“Luckily we got the news after our midsems, so we had some time to work on the presentation,” Koubouzis said. In the ensuing week, the team held virtual meetings due to lockdown restrictions in place to limit the spread of COVID-19.

They went back and forth over the amount of information and fine detail to include in their slides, and they conducted “many, many, many speech rehearsals,” Koubouzis said. “We were both excited and stressed, proud we made it this far, but eager to do even better.”

IT Crowd would be the first team to present in the final round, which took place on 30 September. The entire event can be viewed on the YEA website, and IT Crowd’s presentation can be seen here and also below.

Koubouzis and Robinson spoke for nine minutes, then fielded questions from the jury for six minutes.

“Whilst we aim to utilise carbon from every coal power station in Australia our initial focus will be targeted towards Queensland, Koubouzis said. “Queensland is not only one of the biggest energy consumers but it’s the state with the most coal power stations and is the largest contributor to methane emissions. In the early stages of the project CO2 will be collected from the Gladstone PowerStation as its seafront location and land base facilities are desirable for our project.”

“One reason for such a stepped and scaled deployment is that our solution requires market acceptance,” Robinson said. “We will have to experiment with this, and to test the market to find out whether “Net Zero Beef” or “Carbon Captured Beef” can sell at a premium, similar to free range eggs.

McGarry, who serves as Future Energy Capability Leader the global engineering consulting firm, Aurecon, prefaced his question with high praise. “I loved the presentation. I thought it was really interesting and incredibly well-presented,” he said. “It’s no small feat to condense a lot of content and thinking into a short presentation so I really appreciate how hard you worked on that. It must have taken many hours,” he said.

McGarry expressed particular delight with the secondary impact of methane abatement, and asked about the downstream value chain and revenue. He suggested lobbying for government subsidies via Australian carbon credit units, and called the idea a “slam dunk” and a “great vehicle for emissions reduction.”

“We did have a joke saying we need to get investment money to start lobbying, so that was considered an option,” Koubouzis said with a laugh.

Ultimately, the jury selected Sniff Sniff from Monash University as the YEA Case Competition 2021 National Champions. Their project focused on reducing carbon emissions in the production of cement by mineralizing carbon in seawater and creating a new, more sustainable form of cement.

The IT Crowd was declared as runners up, which came with a $500 prize, but Koubouzis said “being seen and heard” was the only windfall that matters.

“Unfortunately, Australia is sleeping on climate action and it's very rare that young voices are heard,” she said. “Putting our research out there and showing people how we, as a nation, can become a leader in combating climate change — that was the most rewarding thing for us.”

Grady valued the experience for the window it provided into what it will be like to work in the engineering industry “as companies look for opportunities to create new infrastructure for specific purposes”.

“In industry we might be doing something like this project but on a larger scale, in more detail, and spanning over months or even years,” Grady said.

Dutta especially appreciated “being able to compete with students all over Australia” and “knowing that we're not alone in wanting to explore our limits beyond university.”

“Being challenged to think differently, and so much deeper than is usually required of us was a refreshing experience to say the least,” Dutta said.