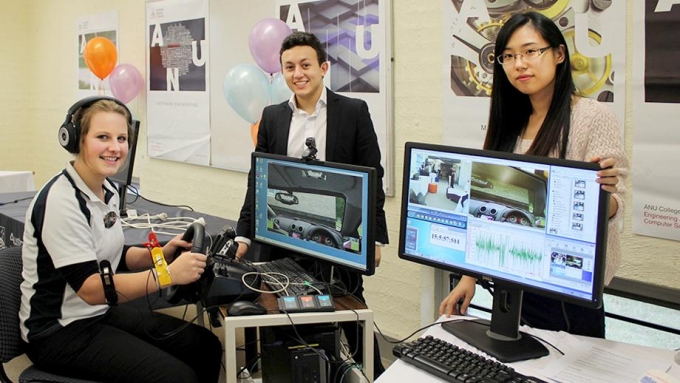 Robots, driver simulation and creating music with code were just a few things on offer to showcase computing careers to young women interested in careers in computing.

ANU joined a global effort to raise awareness and empower young women to consider studies and careers in Information and Communications Technology's (ICTs) as part of International Girls in ICT Day.

Students in years 10 to 12 from New South Wales and the Australian Capital Territory talked to current students, heard from women in the industry and participated in a range of workshops.

Year 10 Yass High School student Charissa Cresswell, a dancer who wants to make her own music, strengthened her hopes of working in computing after seeing music composed using computer code.

"To be able to make my own music with code would be a lot easier than doing it other ways," she said.

"Having this opportunity to talk to women working in ICT was inspirational and seeing all the other students who participated makes it clear I'm not the only one who wants to get into this field."

Lynette Johns-Boast from the Research School of Computer Science said women were a minority in computing, something she wanted to see change.

"Girls are in the minority and often lack in confidence, so having a girl's only day gives them the opportunity to be hands on," she said.

"There is often a negative stereotype around geeks and working in computing. We wanted to show that computing is not just about maths or physics or the things that we tend to thinks as boring. It is fun and can be quite exciting.

"By bringing our passion to the fore we hope to encourage then next generation of women in computers."