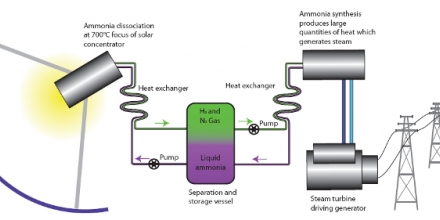 In the ammonia-based thermal energy storage system (Fig. 1), liquid ammonia (NH3) is dissociated in an energy storing (endothermic) chemical reactor as it absorbs solar thermal energy. At a later time, the gaseous products hydrogen (H2) and nitrogen (N2) are reacted on demand in an energy releasing (exothermic) reactor to resynthesise ammonia and recover the stored solar energy.

Because the solar energy is stored in a chemical form at ambient temperature, there are no energy losses in the store regardless of the length of time that the reactants remain in storage. The reactors are packed with standard commercial catalyst materials to promote both reactions. Counter-flow heat exchangers transfer heat between in-going and out-going reactants at each reactor to use the energy most effectively. Apart from the ability of the ammonia system to allow for solar energy storage, other advantages, that are not necessarily shared by other solar thermochemical or photochemical systems, make this process unique: