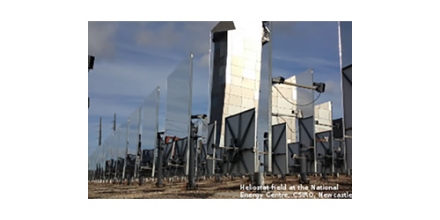 A heliostat is a motorised mirror which tracks the sun such that reflected light is continuously aimed onto a single, stationary target (receiver) at top of a tower where the solar radiation can be absorbed and converted into thermal energy. There may be many thousands of heliostats for a single tower, therefore the cost of the heliostats is a critical component of the levelised cost of electricity from a central tower solar thermal power plant. In the period 2005–2013, the concentrating solar thermal industry sustained a 40% growth rate in installed capacity, but for this to continue, it is generally accepted that a deep reduction in heliostat cost is required. The ASTRI Heliostat Cost Down Project aims to develop a new, low-cost heliostat design.

The implementation phase (planned for Jun 2014–Dec 2016) will include a design concept stream and a technology development stream. Initially four separate heliostat design concepts will be investigated, narrowing down to a single concept over the course of the project, for detailed analysis and proof-of-concept testing. ANU will champion a heliostat concept based on a sandwich panel design, approximately 30 m2 with thin glass or film mirror sandwich facets, little support structure, wind-load reducing features, and autonomous control and power. Three alternative heliostat design concepts will investigated in parallel, championed by CSIRO and UniSA. Technology development streams will include mirror facet development (ANU, Flinders), manufacturing systems (ANU), design and testing tools (ANU), aerodynamics and wind loads (Adelaide) and O&M systems (QUT).