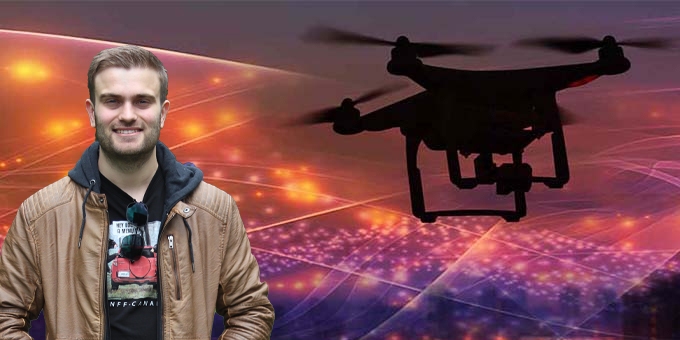 As he powered his way toward a Bachelor of Engineering and a Bachelor of Science (to go with a Maths Modelling major of his own design), Lewis Aston had scheduled the Capstone engineering project for his second-to-last semester. He didn’t have high expectations.

“We know what the deal is, we know that the ANU is building relationships with private industry. The Capstone course is a requirement and that’s fine. But then you realise it’s required for a reason,” Lewis said.

“It gives you a chance to reflect on your education. You’re at the end of your degree, and this is what you’ve learnt. How well can you apply it to a job that has been assigned to you? It all sort of develops from there. The relationships, the work, the knowledge that you gain. It was a really, really good experience.”

Before the semester was over, Capstone had become the focal point of Lewis’ studies and galvanised a budding career. An inspiring mentoring relationship had led to an eight-week Summer internship, and then the offer of a full-time position at one Australia’s leading engineering firms after graduation.

Department 13 is a military-grade drone technology company founded in 2010 by former military operators, scientists, and engineers applying proprietary advanced technology to remote machine operations for commercial, government, and defence clients. It’s head office is now based in Australia’s capital city of Canberra, and a major focus for Department 13 has been securing the airspace above government and private assets.

In May of 2021, Department 13 hired Joni Sytsma as Chief Technology Officer, and part of her role was to develop a long-term relationship with ANU. Sytsma initiated Department 13’s first project with the ANU Capstone program by presenting at “project selection night” at the start of the next semester.

“I wanted to solve the problem of detecting drones with audio,” Sytsma said. “Not a motorcycle, not a whipper snipper, not anything else that goes buzz buzz. A drone detection system that has low false negative and low false positive.”

The project immediately appealed to Lewis. He thought the goal was exciting and the scientific approach would align closely with his interests. The project began with a series of virtual meetings between Sytsma and the six-member Capstone team.

They soon organised themselves into two groups: three on the development side and three on the communications side, providing documentation for both the client and the university such as the Concept of Operations and subsequent audits.

The development team worked on Neural Networks, MelFrequency Cepstral Coefficients, and Digital Signal Processing (DSP). Lewis was tasked with using DSP to analyse audio files and determine “not just if a file contains a drone sound, but at what times, as well as determining movement of a drone in relation to the microphone by analysing how the harmonics’ frequency and power shifts”.

The process required frequent communication with Sytsma. “I really liked the work we were doing and I liked Joni. I enjoyed talking to her,” Lewis said.

At that point, Lewis’ master plan to graduate in a year’s time with three majors was in jeopardy. The pandemic had made the Engineering major’s work requirement more difficult to fulfil. He needed eight more weeks of experience in the field and had applied to several firms over the years, “but I had been rejected time and time again,” said Lewis.

For one such position, he was among six finalists out of 2,500 applicants, but just as the Capstone project was ramping up, he learned that he had not been chosen.­

He feared that he would not be able to graduate as planned. His plan B would be to move back to Perth and look for a summer internship the following year.

Lewis requested a virtual meeting with Sytsma and shared his predicament. Sytsma went to Department 13’s CEO Lee Croft and due to Lewis' excellent performance to date coupled with the growing connection to Capstone, they agreed to offer Lewis a paid position for the approaching summer.

For this, Sytsma decided to challenge him further. “I scoped out a project that was nothing like what I’d asked of him before and nothing like he’d ever done,” Sytsma said.

Lewis and Sytsma met in person for the first time on Lewis’ official first day of work. He would be designing a circuit board for an advanced radio detection system, powering and controlling external devices such as a GPS sensor, and a temperature sensor. “I had to figure out the power requirements, how thick to make the copper traces on the board. It was nice to be on top of things and see how they fit together,” said Lewis.

For eight weeks, Lewis integrated seamlessly into Sytsma’s development team. His task was more complicated than the Capstone project because “the requirements were not static, they were always changing” as his colleagues simultaneously developed elements that his circuit board would connect.

Sytsma was pleased with Lewis’ work, as was the Department 13 development team from top to bottom.

“This is a functional, absolutely required component of the next version of the product and if Lewis hadn't done it, I don’t know who else would have done it. That’s why we’re now offering him a full-time job,” Sytsma said.

We, the true geeks

Sytsma said that she and Department 13 will be participating in Capstone again in 2022, and a likely project will be to continue the work that Lewis and his team began in 2021.

“They’ve written the algorithm that does the detection. Now it needs to be running in a continuous cycle on an embedded hardware solution. A raspberry pi [a tiny computer] with a microphone and some other stuff hooked up to it,” she said.

Sytsma sees projects like Capstone as a way to incubate and assess talent and to “give back to the science community in this country”. She also sees it as a smart, practical component of research and development.

“I’ve been doing this sort of thing for quite a few years now,” Sytsma said. “I’ve got a job to do, which is to build the tech that ultimately we’re going to sell. But that’s not the main motivation. Every time I interact with folks that are outside of the organisation that I’m in, it’s an opportunity to bring someone in.”

Sytsma said Lewis is a “prime example” of success for a program like Capstone.

“He was just so enthralled by the digital signal processing. He kept on calling me. The project was over. They’d submitted the final report and he’s asking me all these questions because he really wanted to learn,” she said.

“The true geeks aren’t just in it for a grade or a dollar. The true geeks are in it because they really do want to know. When I see that kind of passion, I want to do what I can to throw some fire on it,” Sytsma said.

How does Lewis Aston feel about being a “true geek” on the Joni Sytsma scale?

“I am okay with the sentiment because it's in her own words and her own experiences, although the term nerd is more technically accurate. However I would still not use this to describe myself, I would say I’m passionate,” Lewis said.

Nerd, geek, or passionate — he went from fearing he wouldn’t graduate to having a job offer, friends, and colleagues waiting for him at a leading drone technology company.

Lewis says he has a developed a deep appreciation for the ANU Capstone project, but not just because of his own experience. He saw it benefit his classmates as well. “It provides a transition period from the academic setting to the workforce,” he said. “They’re essentially embedding you with these fantastic companies, and these fantastic people that have projects that really challenge you and allow you to learn.”